I have limited hand-eye coordination. I am terrified of fast moving balls. And honestly, I lack the fierce competitive spirit it takes to play in team sports. I can, however, put one foot in front of the other. That is how I got into running. I had to take a lifetime fitness class in college and I chose
“Beginner Jogging.”  Now after several 5K races and a handful of half-marathons and marathons, I am proud to say I am no longer a beginner jogger but a full-fledged runner. I like the catharsis of a good long run and the feeling of an intense work out, but lately because of the cold, I was looking for some motivation. 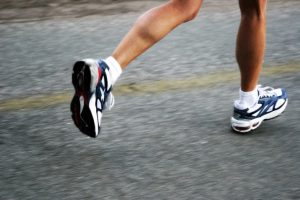 What better motivation is there than running with friends with food and beer after? There are social runs for almost all the days of the work week in Raleigh! Recently, my husband and I have been consistently running on Wednesdays at the YMCA/Trophy Run Club. We leave at 6PM from Trophy Brewing Company and there are groups that run/walk 1, 3, or 5 mile routes around downtown Raleigh. If you run five times, you get a free t-shirt! There is always delicious cheese pizza (only a dollar a slice for runners!) and we like to stay around for a pint and mingle with folks.

Here is a list of Raleigh run clubs, all runs start at 6PM. Lots more run clubs can be found on MeetUp.

Since it is winter and the sun sets early, make sure you are safe and visible while running.  If you want to look really cool (or obnoxiously visible), check this out!