Heading into each Spring and Summer, I like to experiment with a different type of physical activity. Last year, I found myself trying to paddleboard and that was definitely not for me. I don’t mind getting wet while exercising, but when one finds oneself in the water more so than using one’s core or arms for stabilization, then perhaps it’s best to move on this season to a completely different form of mindful physical activity. 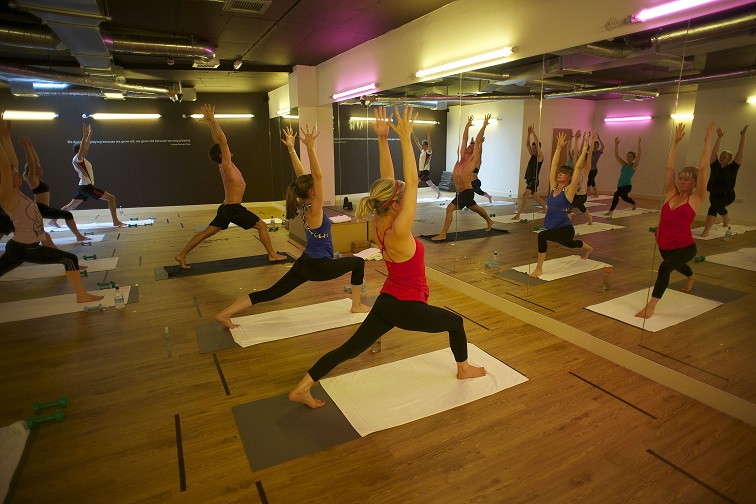 I continue to enjoy the challenge of instructing indoor cycling at my YMCA and have blogged about the ongoing physical and mental challenges of CrossFit. Running has taken a back seat lately as I have scaled back any long runs to just 1-3 miles, mainly due to protecting the cushioning of my knees. Some minor arthritis has found its way into my right knee, thus no more half marathons for this dude—at least not for now. In constructing an inventory of what’s next possibilities for a variety of physical activity this Summer, I was thrilled to find a side perk of my local CrossFit membership, limited monthly sessions of hot yoga.

HOT yoga! Yes, it is the wonderful mind-body fusion that I’d experienced numerous times at my YMCA combined with raising temperatures from a range of 85 degrees Fahrenheit to almost 105 degrees Fahrenheit with increased humidity levels! It took some serious poking and pulling from neighbors, also CrossFit members, to have me try my first session in late winter of this year—I knew after two sessions that I’d found my new adventure!

Don’t get me wrong. I don’t think anyone really loves hot yoga at the onset—there is much to which one must acclimate. For starters, it’s HOT! The increased temperature means fluids are lost more readily and must be replenished with copious amounts of water before, during, and after the sessions, which run anywhere from 60 – 75 minutes at my hot yoga location. Those sessions are not for the faint of heart nor for the faint of head. Monitor your body and let a qualified instructor know when you’re not feeling stable or generally well. All poses from yoga may be modified and hot yoga is no exception. Be prepared to take child’s pose often and at any time—I do it numerous times, whether prompted or not.