This is my very fabulous American Bulldog, Ruckus! I am sharing his picture not just because he is cute, but because he is the reason why I generally don’t get to bring food to holiday gatherings.  My family is old school African American and people who have indoor pets and 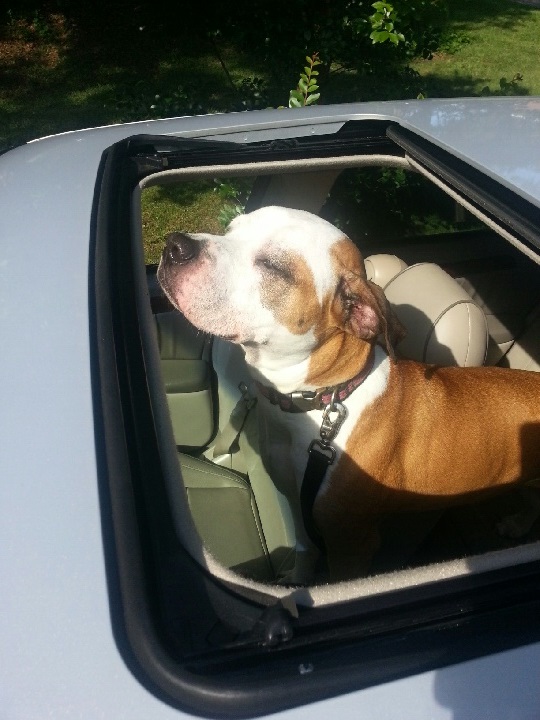 bring food are considered a little suspect.  I don’t know where this cliche comes from, but it was the reason that my family always had to know who cooked what at any potluck. The cliche included indoor pets, people who didn’t wash their hands, and those who were known to be poor cooks.  Also to be fair, in addition to having an indoor dog, I am not necessarily known for my outstanding culinary creations.

Despite having a dog who sleeps on the bed (but who does NOT walk on countertops, get bathed in the sink nor eat or drink out of the same bowls and cups as people, which you would think would be the case for this strict rule)—I made food this year.  Before you wish me well and think that I’ve overcome years of bringing drinks and store-bought options to potlucks—the food I made was for the Holiday Challenge Taste Test.  Here at the office, the Holiday Challenge staff and partners taste test several recipes before choosing which ones make the cut for the Holiday Challenge. For the first time, I made Mississippi Spiced Pecans.   This involved using Rosemary, Thyme, Extra Virgin Olive Oil and other simple ingredients.  It was an exciting undertaking for me to try something new, as I even went over to do it at my sister’s house because I didn’t have a knife sharp enough to finely chop the fresh Rosemary and Thyme.

I had a wonderful time making the nuts and most folks in our office found them more than palatable.  As any of you who follow the Mediterranean Diet know, nuts are a great healthy option.  I wanted to make them as an appetizer for Thanksgiving, but decided to wait until next year.  I was allowed to bring a store-bought option which everyone enjoyed.  It’s all about small steps. So while you are cooking your possibly complicated, mostly healthy but definitely tasty dishes for the upcoming holidays, just think of me, enjoying great food and only having to supply drinks.  Thank you, Ruckus!